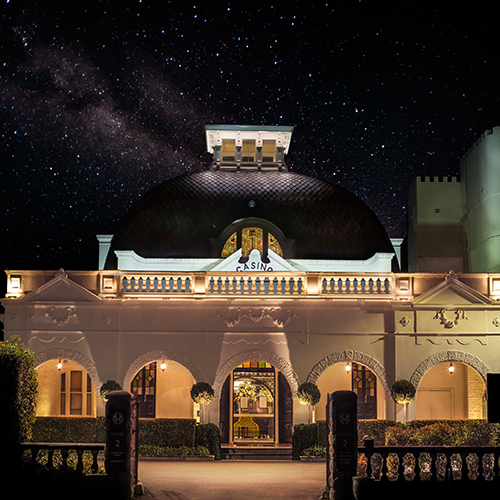 Most of the construction of the Hydro Majestic took place in 1903, the same year Mr Foy successfully applied to have the name of the township changed to the more appropriate "Medlow Bath" The inner workings of the resort were all thoroughly modern and included a steam-driven generator imported from Germany. This generator produced electricity for the resort and the neighbouring township of Medlow Bath. In fact the Hydro Majestic had working electricity four days before the city of Sydney. The resort also had its own water supply, steam laundry, freezing works, sewerage treatment works and a telephone system connected to the Sydney exchange.

Mr Foy hired Dr George Baur formerly of the "Shoeneck" health spa on Lake Lucerne in Switzerland to devise and supervise a program of diets and weird and wonderful treatments.

The Hydropathic Establishment officially opened on July 4th, 1904 during a snowstorm. A group of special guests arrived by train at Penrith where Mr Foy had a fleet of motor cars waiting to drive them to the Hotel. Artworks collected from all over the world were housed in a gallery several hundred feet long. Entertainment took place in the Casino Ballroom (it was never used for gambling) the magnificent dome is still in place today. The dome was pre-fabricated in Chicago and shipped to Australia. The guests strolled along the picture gallery to reach the Grand Dining room, the half barrel vault ceiling with its gilded features, is still much admired.

The Hydro Majestic attracted guests from around Australia and the world. Famous Australian Opera singer, Dame Nellie Melba sang at the hotel a number of times as did English Opera singer Dame Clara Butt and Nellie Stewart.

A number of well-known Foy family friends also stayed at the hotel including Hugh Ward, Dame Nellie Melba's Australian manager and his son naturalist and anthropologist, Melbourne Ward and Freddie Lane who was the first Australian swimmer to win gold at the Paris Olympics Games in 1900.

In 1922 fire destroyed Belgravia and the gallery. Mr Foy however, took this loss in his stride and commenced work on the New Belgravia, which was to take fourteen years to complete. In 1942 the Hydro was taken over by the U.S. Defence Department and turned into a hospital for American casualties from the battles of the Coral Sea and South Pacific.

In 1946 a new building was opened with bedrooms on the upper floors and a large lounge downstairs complete with a huge fireplace.

Mark Foy died in 1950 aged 85. His family, politicians, sportsmen and other dignitaries attended his funeral. His many significant contributions to Australian life spanned the areas of medicine and sport to retailing and tourism. Certainly he was a true pioneer of the Australian hospitality industry.