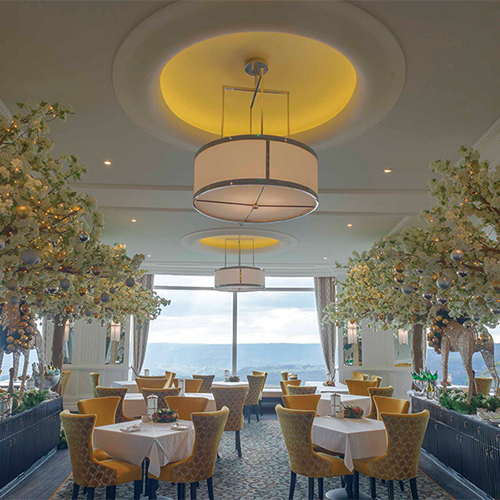 In the Salon du The and Cats Alley we celebrate all that is Oriental in the history of the Hydro Majestic featuring a Shanghai chic tea room and bar, decorated with pure magenta red walls with custom designed carpets that feature giant Chrysanthemum flowers, the Hydro Ivy Motif. The Salon du The, with its tea displays, is a comfortable and relaxing setting furnished with Oriental inspired red leather chairs, detailed wallpaper friezes and light fittings.

The Salon du The then opens through into the infamous Cat’s Alley, also decorated with pure magenta red walls, custom designed carpets with the Hydro Ivy Motif, furnished throughout with luxurious and plush chairs and large sofas, of which some are the few remaining original pieces of furniture at the hotel.

The walls along Cat’s Alley showcase a range of original Zimmerman paintings, which were relocated from the original display in the Casino Lobby, add a moment of English inspired story-telling of man’s great battles throughout the past century.

The Salon du The and Cat’s Alley offers a unique ambience with a casual setting showcasing the magnificent views overlooking the Megalong Valley whilst providing the opportunity to rediscover the understated decadence of the Empire with a refined Asian-inspired snack menu and a range of teas, regional & imported wines and other beverages.

Constructed in 1903, the Salon du Thé incorporate the historic The Billiards Room and the famous Cat’s Alley. The Cat’s Alley historically functioned as a ‘ladies lounge’ and picture gallery for the display of prints and drawings.

In 1939, additions was designed by Dudley Ward to adapt the structure into the hotel’s main entrance, including new external entrance, port cochere on the eastern facade and southern fireplace. From 1939-1947 the Salon du Thé was used as the hotel’s main entrance and later from 1947-1997 as a billiards room. During this period, the Salon du Thé was decorated with federation-style colours and “Waratah” friezes.